As of March 2021 Cognitive Principle Therapy has been upgraded to incorporate concepts from four areas/writers in psychology. These include:
-Stephen Porge's Polyvagal theory of the nervous system.
-Daniel Kahneman's "Thinking Fast and Slow" The concept of System 1 and System 2
-Dr. Iain McGilchrist's work on the left brain-right brain functional theory
-Lisa Feldman Barrett book on "How Emotions are Made"

The above 4 concepts have now been built into the Cognitive Principle Matrix to provide a different way of thinking about and treating psychological problems from a systems perspective.
The key starting point is to divide the brain and the body into System 1 [right brain] and System 2 [left brain] and accept the there a only four emotions generated in the body, namely fear, anger, sadness and happiness and these align with Polyvagal theory. [flight, fight, freeze and calmness]. The other 200+ emotions are developed in the brain as stated by Lisa Feldman Barrett.
-With this model it is easy to understand communication differences which exist between dominant left brain [men as a generalisation] and dominant right brain [women as a generalisation] -How system 2 users [ left brain] may mask their emotions using anger [fight], anxiety [fear], freeze [depression] and happiness [false positives, eg addictions]. They have underdeveloped the 200+ other emotions.
-How Attention works, using the Task Positive Network [Sys 2] or the Default Mode Network [Sys 1] -How Memory works, using Working memory [Sys 2] and Short and long term memory [sys 2] -How Maslow's hierarchy works. Sys 2 has needs for self actualisation, whereas sys1 only needs safety. This is where a lot of inner conflict occurs, because Sys1 is the dominant system and you can't move to higher needs, if safety needs are not meet.

We are moving from LEVEL 5 to LEVEL 6

The concept of teaching to get a job started at level 2 [Industrial revolution] and has continued for 150 years, but it is not longer relevant. Jobs are becoming obsolete or their nature is changing too quickly. We need to teach principles so that we understand the basics of language, mathematics, science and the arts, however, we don't need the detail to be taught.

We need to encourage creativity to apply principles, so that we can more easily adapt. This concept applies to the social sciences, we need to teach the principle that there is meaning in life, that is, in relationships [beliefs or in another person] and in work [paid or unpaid] and in suffering [Victor Frankl's-"Man's Search for Meaning"] 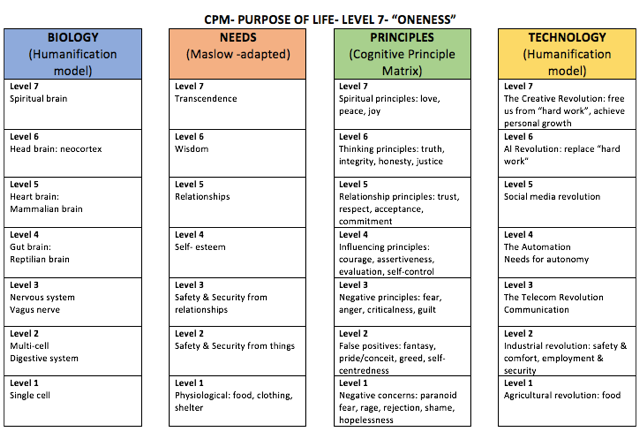 The levels, however, are not separate, they are integrated and  supported by 7 Systems, 7 Rules & 7 groups of behaviors. Once a person understands the principles and the supporting systems, rules and behaviors they can be creative and solve their own relationship, work and personal suffering issues. This is what the Cognitive Principle Matrix teaches.

Cognitive Principle Matrix as shown below 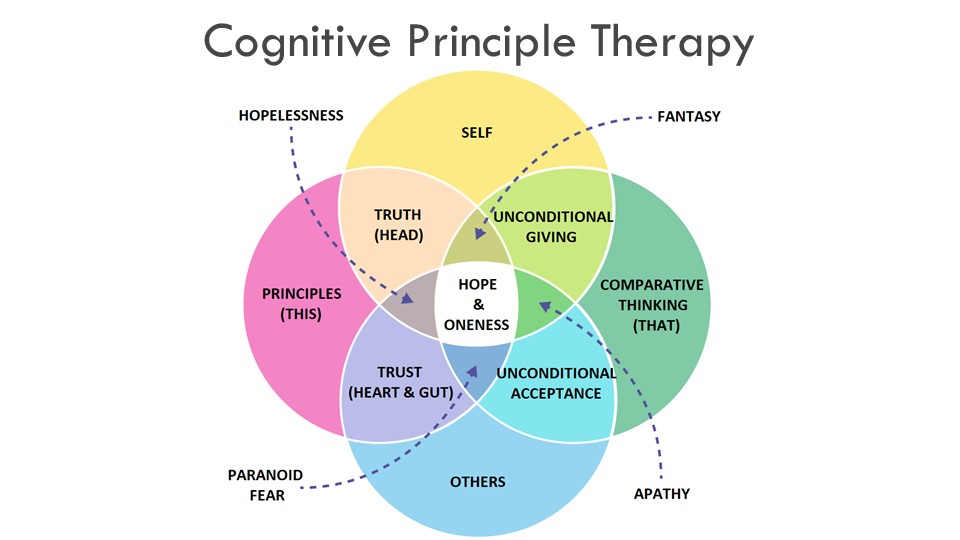 The principles are grouped into seven groups each with its own level.

You can achieve your goals a lot easier once you understand how your system works.