15 Types of anger-You have one or more of them. 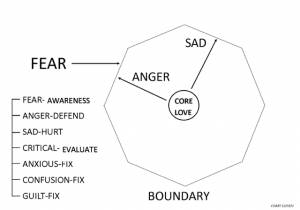 Anger arises from the various combinations of the three factors which drive our needs. These are:

• Type of control we use.

• Our personality type or behavior.

There are five types of control we use are:

1. External control by others [victim]

2. Manipulative control by self

The purpose of the negative emotions are as follows:

The purpose of fear is to provide a warning that your boundary is being or may be threatened. That is, someone is threatening your physical, emotional, mental or your spiritual needs. Eg. I fear this person is stalking me.

The purpose of anger is to respond to the fact that your boundary has been broken. That is someone is physically, emotionally, mentally or spiritual threatening you. Eg This person is standing at my front door, I’m going to call for help.

The purpose of sadness, is to grief over the damaged caused after your boundary was broken. That is, the hurt you feel after someone has physically, emotionally, mentally or spiritually hurt you. Eg I feel violated that this person entered into my life.

Four other emotions can follow sadness and their purpose is to prepare you to fix the boundary. The first is being critical of those responsible for breaking the boundary. If you were responsible for the boundary being broken then you will feel guilt. If you are unsure how to repair the boundary, then you will feel confused and or anxious. Eg. I’m angry at myself for being friendly to this person, but also angry at them for taking advantage of my friendship. I feel confused anxious about knowing how to stop them.

What is normal anger?

Normal anger is where you use assertive control to protect your boundary and do not mix it with the other negative emotions.

That is, each emotion serves a specific purpose and no other.

What happens when you loose assertive control?

Instead of thinking assertively, which is:

Note: Rumination is where you continually go over the same negative thinking in your head. The affect of rumination is the generation of negative energy in the subconscious mind which causes negative emotions to attach to each other and form different types of anger.

If a person is at fault and they can’t handle their negative thinking of being critical and blaming themselves, then they do the opposite way of thinking which is a false positive:

Then the blame will be directed off themselves and on to others.

The following 15 types of anger are then formed when assertive control is lost:

They are based on one of the five types of control and the personality style that we use. The negative energy generated through rumination causes other emotions to be attached to anger and assertiveness is lost.

Controlling others to get your own needs met, without considering the needs of others.

Examples: Making up a story which didn’t exist. Creating confusion through lying so that the perpetrator in the only one in control.

Emotion: Fear converted to fantasy, combined with anger and being critical.

Reasons: Fear of loosing control and being exposed as a fraud or feeling grossly inadequate.

Controlling others to get your own needs met, without considering the needs of others.

Examples: Getting angry so that others will back down and get your needs met, particularly those who don’t like anger in their lives.

Emotion: Greedy and self-centered. Not driven by negative emotions.

Reasons: Strategy to get needs met. Manipulative control by self.

Controlling others emotions and behavior to get your own needs met, without considering the needs of others.

Examples: Controlling all behaviors and telling the other person how to feel.

Emotion: Paranoid Fear combined with anger and being critical.

Reasons: Fear of not being in control and loosing sense of identity.

Example: Blaming others for being a few minutes late over an unimportant event.

Emotions: Anger mixed with being critical.

Feels anger but blames someone else.

Example: Criticized by boss, but blames partner when comes home.

Emotions: Anger mixed with being critical.

Reasons: Habitual anger, wants to be assertive, but can’t.

Feels angry at someone, but does not express it and blames self.

Example: Criticized by boss unfairly, goes over how they would take revenge, but does not act on it. Blames self and might punish self in some way. May say “I’m a terrible person.”

Emotions: Anger mixed with critical and guilt leading to shame.

Reasons: Habitual anger, wants to be assertive, but can’t.

Feels angry, but denies that the anger exists

Emotions: Anger mixed with fear [of being angry] leading to avoidance.

Reasons: Habitual behavior, that anger is bad and cannot be expressed. Also fear that if the anger is expressed it may get out of control.

Has learned the anger cycle which is, lack of respect, frustration, anger and or abuse.

Example: Gets angry over any minor feelings if not being respected or frustrations at things not turning out as expected.

Reasons: Habitual behavior with no awareness or education of an alternative to anger. There is a lack of evaluation, self control and commitment to fix the problem.

Has learned the anger cycle of lack of respect, frustration, anger and or abuse. However, also derives a lot of emotional energy from the anger.

Emotions: Anger mixed with any other negative emotion required.

Reasons: Habitual behavior, but addictive because of the feeling of control that anger provides that no other emotion can match.

10. Moral Anger [Can escalate into Hate based Anger]

Gets angry whenever there is injustice being done.

Example: Uses anger to force others to accept his or her beliefs. If mixed with fanaticism can lead to abuse, such as domestic violence.

Emotions: Anger mixed with being critical and a fear of loosing control.

Reasons: Habitual behavior, based on excessive pride and self-centeredness in their values and judgments.

Gets angry but shows it through confusion, laziness, procrastination, etc to frustrate others.

Example: Say they will do something, then fail to do it.

Emotions: Anger mixed with fear of exercising control and being critical leading to rejection, guilt leading to shame, or anxiousness leading to panic.

Reasons: Cannot face the responsibility of the challenge due to past failures. Gross lack of assertiveness.

Fear that others are angry at them, when they are not. They don’t realize their own fear is projected onto others.

Example: Fear based fantasy expressed as an unbelievable story to a logical person, such as everyone is conspiring against them.

Emotions: Anger combined with paranoid fear, rejection of self and others and anxiousness turning into panic.

Reasons: Do not trust themselves or anyone else.

Gets angry and lashes out at others who criticize them or ignores them.

Example: Gets angry when they are left out of a conversation amongst their family or friends.

Emotions: Anger mixed with fear and guilt leading into shame.

Reason: Their rumination cycle is so great that they are constantly criticizing themselves, so that when someone else criticizes them they take it personally, even when it is not.

Example: Gets angry when performing multiple tasks and can’t complete them causing high levels of frustration.

Emotions: Anger mixed with fear and anxiousness leading into panic.

Reason: Their rumination cycle is so great that they are constantly feeling under pressure to perform and feel someone or something is deliberately working against them.

Anger arising out of resentment for feeling hurt, requiring the other person to be hurt to the same degree or more.

Example: A friend breaking off a relationship and publishing confidential photos on social media to hurt them.

Emotions: Anger mixed with fear and sadness at being hurt.

Reasons: Habitual anger, requiring justice to be seen to be done, so that the person doesn’t feel they have been taken advantage of.